It’s a question that philosophers have debated over for millennia. Such philosophical debates are well beyond the remit of what I would normally talk about on this blog and I’m not going to change that with this post.

I only raise the question because I think we are increasingly struggling with understanding what is true.

Recently someone told me a story as if it were fact and then proceeded to tell me that it had to be true because they checked on Google! Is Google a keeper of truth?

The BBC recently highlighted a set of false rumours that were circulating around the Internet regarding the Nepal earthquakes.

Dramatic footage and images have emerged from Nepal, showing the devastation caused by the most deadly earthquake in the country in 81 years. But amid the authentic pictures are fake footage and viral hoaxes.

One of the biggest: On Facebook and YouTube, various versions of a video were erroneously described as closed-circuit television footage from a Kathmandu hotel. They show an earthquake causing violent waves in a swimming pool. The video was picked up by internationalmedia – including one of the BBC’s main news bulletins – and has been viewed more than 5m times. However it’s not from Nepal – it appears to have been be taken during an earthquake in Mexico, in April 2010.

Someone went through the effort of scrubbing the date stamp from the video to make it more believable! Even the BBC wasn’t sure about truth?

I don’t think a month goes by without someone sending me an email, tweet or Facebook post about some scare story that I need to respond to. Not one of them has been true?

In a world where information is replicated, sent, favourited, retweeted and recreated by billions of taping fingers and thousands of robots, how do we recognise the tellers of truth? In that same world how do we use the indexers of information to validate truth?

Google isn’t trying to be a truth teller – it’s just answering the questions you ask it from the index of information that it has.

How was a  parents told about the Game of 72 to know that is was completely fake?

We’ve had systems of trust for generations that have relied upon personal relationships and having proven track record. Most people know someone who they can rely on to tell the truth, likewise most of us know someone who’s words aren’t worth the breath that created them.

Once we started writing we began to place our trust in those doing the writing.  When it came to news, the journalist became our teller of truth.

Then came the radio and the television and the journalist retained their position.

The position of the journalist is under massive pressure though. The pressure to report ever more rapidly means that they have less time to validate a story. The ownership of news organisations creates problems when the owners want to portray a particular viewpoint. Revenue reduction for newspapers means that fewer journalists are covering more news.

We are becoming increasingly sceptical about the truth-telling of journalist.

That’s just one sphere of truth – the news.

How many times have you read about a new scientific study only to be told a month later that another one contradicts it.

The following diagram shows the diversity of outcomes from studies on foods and cancer: 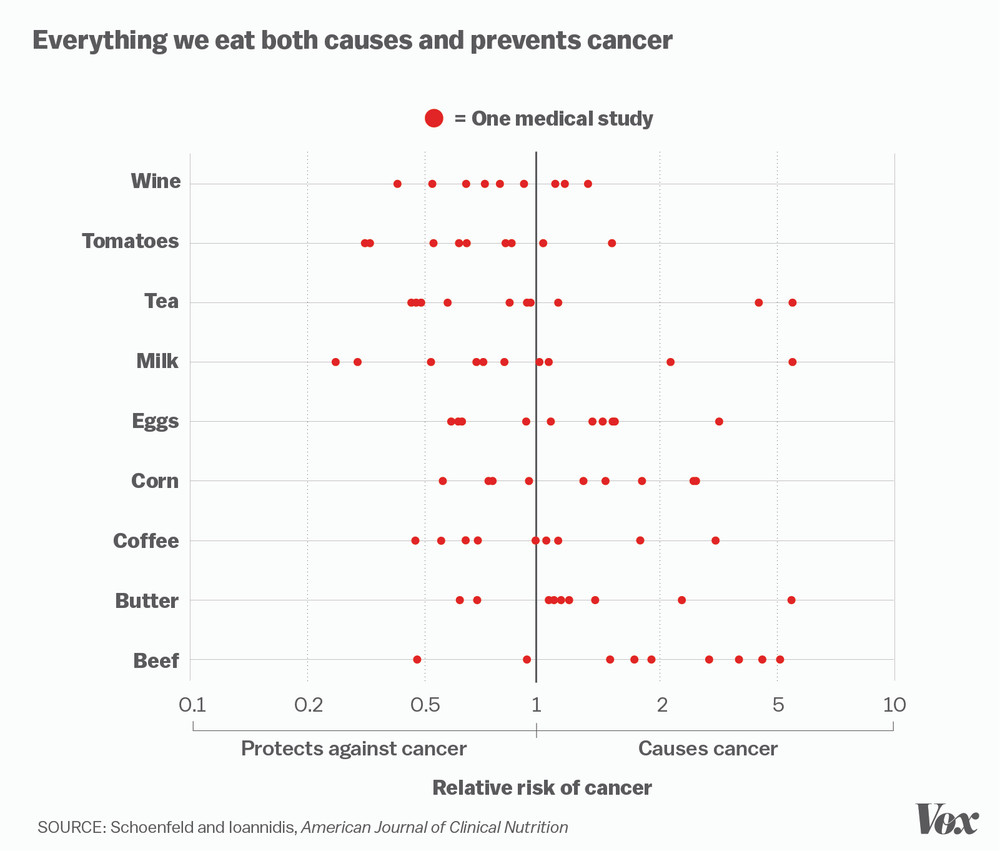 How do you tell the truth from that? Should I drink tea or avoid it?

We are become increasingly sceptical about the truth-telling of scientist.

If we have a problem with journalists and scientists how do we decide who is trustworthy? Who are our tellers of truth?