I’ve wanted for some time a place where I can link people to everything that I contribute to.

One of the ways of doing this is to link everything to everything and to post updates in multiple places. This kind of works but is a bit clunky with current capabilities. When I post updates to this blog they are also posted onto Twitter and Facebook, but there are other things that I do that I don’t post either here, or on Twitter or Facebook. But how would anyone know what I do and don’t contribute to?

I’m currently using About.me for the purpose of linking people to the things that I am currently contributing to. At the top level it’s a really simple concept, I like to think of it as an online business card. What I mean by this is that it’s a single page that says something about who I am and gives information on how to get in contact. It doesn’t get a lot of visitors, but it gets enough for me to regard it as important, fortunately it barely takes any housekeeping. 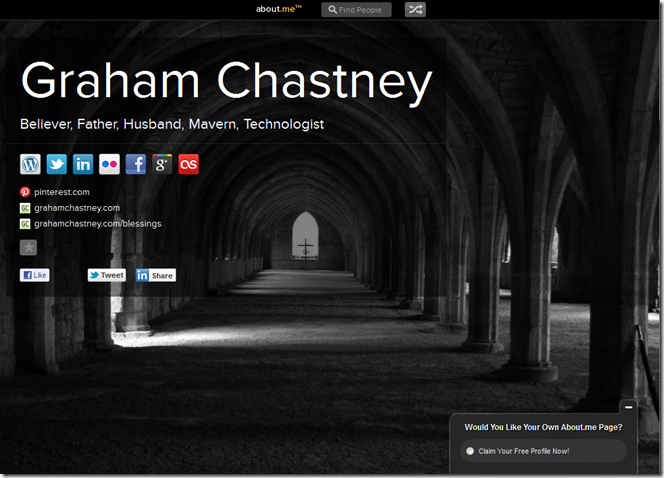 The current darling of the traditional media desperate not to be left behind is undoubtedly twitter – but that’s not why I’m there.

The traditional media, especially television and radio needs to stay relevant to people’s day-to-day life. If you aren’t relevant then you don’t have people’s attention, and no attention means no advertising, and no advertising means redundancy. Irrelevance is not an option. Twitter provides a way for them to retain a level of relevance by providing another means of interaction. But as I said, that’s not why I’m on twitter.

For me twitter is primarily about low level network interaction. I have a set of connections who also use twitter. I rarely see most of these individuals, actually as I come to think about it, there are some that i have never met. Many of them are current and former work colleagues.

I find twitter intriguing from a number of perspectives. In many ways it’s a glorified gossip circle, but that’s not really a very good analogy for it. It’s not the place where you are going to get into some deep philosophical debate, but I’m not saying it’s trivial either.

This is how I use it, which demonstrates some of my philosophy for using it:

I’ve decided to start another mini-series. It’s a bit like the My Tools series from a while ago, but this time I’m going to focus on the various locations where I project some of my social persona.

The first one is Flickr where I project the photographer Graham.

I’ve used Flickr for a long while now, my first picture was posted on 9th December 2009, and it’s still one of my favourite pictures.

In my view it’s still the best photo social site.

Other social sites, like Facebook, do photos but they aren’t really focussed around the pictures, they are focussed on providing a photographic record of an event alongside other records of the event.

I don’t, for instance, put pictures of the family on Flickr. Most pictures are of scenes or objects, Jimmy and Granddad are a particular favourite for many. I suppose that you might call them the arty photos.

I make most pictures quite open with Creative Commons licenses. Flickr is, in my view, there for sharing.

The Flickr Organiser is a work of genius which allow you to do all sorts of things with the pictures – adding them to groups, adding tags, adding maps, creating and manipulating sets; all in a rich graphical interface.

One of the elements I think needs a good deal of improvement are the maps and satellite images that are available for geotagging the photos. Many photogenic places aren’t near roads so a map isn’t much good, and the satellite images don’t allow you to zoom in close enough. Perhaps Yahoo should leverage it’s recent relationship with Bing to get their images.

That aside, I am a real fan of Flickr. It’s nicely social and I get some good feedback on pictures. People have contacted me to use pictures in professional material in line with the Creative Commons licensing, and I’ve granted it.

I like to interact with other people’s pictures, there are some inspirational photographers out there. There are also a set of photograph archives which I really enjoy too. The Preston Digital Archive is a great insight into the place where I live.

The Flickr statistics tell me some interesting things too, although I’d still regard myself as being in the long tail my pictures have been seen 165,000 times which is a reasonable number.

So that’s my photographic persona ready for social interaction.