I’m quite happy with where I live, but that doesn’t stop me wondering what it’s like for different people to live where they choose to live. 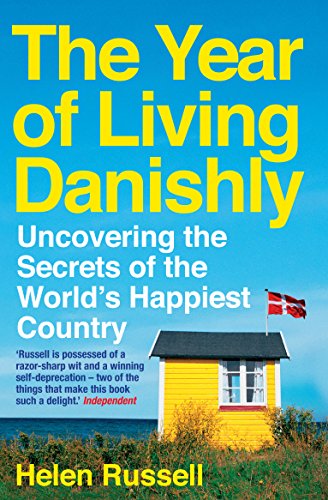 I’ve been to Denmark several times, mostly to Copenhagen, and always loved the country.

Helen Russell is a lifestyle journalist who is, at the start of the book, based in London with her husband. They work, they eat, they sleep, and not a whole lot more. Then her husband gets a job in Denmark at that landmark organisation Lego.

This book documents Helen’s journey during those first twelve month of living in Denmark. Helen finds a country that works very differently to London, and it has to be said, to the rest of the England. I say England, and not Britain, because I think that there are parts of Scotland where much of what Helen found is present, but for the most part we operate very differently.

Not only does Helen find a country that works differently, but Denmark is also regularly ranked as the happiest country in the world, so what is it that makes it happy? Not surprisingly it’s not a single thing, it’s many things. I suspect that it’s all of it that makes it a happy country, I didn’t read something and say, “if we only did that in England we would be much happier”, but I did think, “if only we did that, and that, and that, and weren’t like that, then we’d be happier”. It’s difficult to change one thing in a whole nation, it’s almost impossible to change the whole thing. For starters, the population of England is nearly ten times greater than that of Denmark, there are one and a half times as many people in London alone, and population size is a factor in happiness.

Having said that, this book shines a light into some English orthodoxies that tell us “we’ll be happy if…” and exposes them as problematic, at best, and downright untrue at worst. In England we believe that long work hours show that you are committed to your work, and that has to be a good thing? In Denmark the working week is significantly shorter and yet they are significantly more productive than we are. In England we tend to believe in small government because we are suspicious of everything that government does, Denmark’s government is significantly larger than ours and yet they are happier. In England we downgrade tradition, always looking for the new thing, in Denmark tradition is highly regarded and seen as the bedrock of much of what they do. In England we regard the accumulation of more possessions as a good thing, it’s not the same in Denmark where things are so expensive that they focus on a few high-quality things.

We have much to learn.

One thought on “I’m reading… “The Year of Living Danishly: Uncovering the Secrets of the World’s Happiest Country” by Helen Russell”