Today’s Office Speak appears on most buzzword lists that I’ve seen and rightly so.

At some point in the early 1990’s someone somewhere hit upon this phrase and it suddenly became popular. This is the Google Ngram viewpoint:

Before then none of us were aware that there was a box that we needed to think ourselves outside of.

According to Wikipedia the birth of this phrase was, in part, linked to the semi-famous nine-dots puzzle. The aim of the puzzle is to join together a matrix of nine-dots using four straight continuous lines. Most people struggle with the problem because they constrain themselves to drawing lines within the matrix, the answer involves drawing lines that extend beyond the matrix. In other words, the answer lies in thinking “outside the box”. 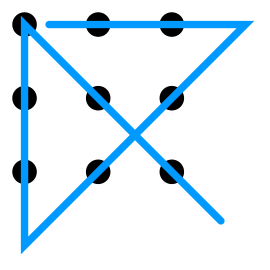 I quite like the idea that this phrase, much loved by workshop facilitators, had a basis in an interesting puzzle, but I suspect that most people who use it have no idea about it’s existence. I didn’t know until I did a bit of research and the image I had was more of a physical box.

Whilst the heritage of the phrase may be interesting it’s use in day-to-day business should be strongly discouraged. If you are a lover of these words I recommend that you stop using it and this is why:

At the end of the day I’m still with Malcolm Gladwell:

“If everyone has to think outside the box, maybe it is the box that needs fixing.”