I’m living in a bit of a buzzword storm at work at the moment. This is nothing new, it comes and goes. I have to apologise is I let some of this storm spill out onto this post, or perhaps I should just get them out of my system right at the start.

Do any of these mean anything to you:

All of them are relevant to this post, but each one demonstrates the problem I’ve had writing it and why it’s taken so long.

Let’s start with trans-disciplinary as it’s in the title of the post:

Trans-disciplinary: literacy in and ability to understand concepts across multiple disciplines

Remember; this is one of the skills we are all going to need in the future of work so we ought to, at least, understand what it is.

I’ve faced this expectation all of my working life:

“you wouldn’t understand because it’s not a technical question”

I happen to be predominantly technical, but that doesn’t mean that I’m not interested in all sorts of other areas. My experience is that most people are the same even if their working environment does  encourage them to learn about other disciplines.

Putting that little rant to one side; the need for the future are people who are highly-skilled, but not narrow. If we are going to fix big complex problems we need people from all sorts of disciplines and experiences to come together to find solutions.  In order to come together people need to be able to communicate and connect across the disciplines.

This is where one of my buzzwords from above comes in – T-shaped professionals. This is a terms that was first used, as far as I can tell, by Tim Brown of IDEO. The term is used to mean people who are broad generalists and also have deep expertise in an area, it’s also used to mean people who can communicate broadly combined with deep problem solving skills. Think about the thousands of specialities all working to produce Wikipedia.

(This is where a number of the other buzzwords come in. Once someone has proposed one shape people are bound to want to propose other shapes. I’m just going to provide the links: share-shaped teams, E-shaped professionals, new renaissance man, versatilists)

I know of one company that even puts the requirement to be T-shaped into their handbook for new employees:

That is, people who are both generalists (highly skilled at a broad set of valuable things—the top of the T) and also experts (among the best in their field within a narrow discipline – the vertical leg of the T).

This recipe is important for success at Valve. We often have to pass on people who are very strong generalists without expertise, or vice versa. An expert who is too narrow has difficulty collaborating. A generalist who doesn’t go  deep enough in a single area ends up on the margins, not really contributing as an individual.

The thing that we all need to recognise is that it’s teams that accomplish complex things, rarely individuals on their own. A team isn’t a set of individuals though. A team is a cohesive unit which needs to work together. People who can make an individual contribution by being highly-skilled in an area while communicating  across a team of people with their own skills.

In my post on the Novel and Adaptive Thinking Space I talked about the idea of The Studio of the Future. One of the key factors for this studio space is it’s personal flexibility. There’s no point in being T-shaped though if there isn’t anyone for you to collaborate with, the point of being trans-disciplinary is to build effective teams.

Hackerspaces (apologies for another buzzword) are community operated physical spaces where people socialise and work together. 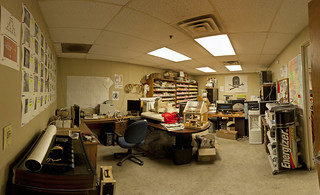 A hackerspace (also referred to as a hacklab, makerspace or hackspace) is a community-operated workspace where people with common interests, often in computers, machining, technology, science, digital art or electronic art, can meet, socialize and collaborate.

These spaces have been produced for the kind of trans-disciplinary activity that we’ve been talking about, but it’s not just about the space it’s also about the philosophy dwelling within the space. An important part of this is the ownership of the space and the resulting freedoms. These spaces give people the context in which they interact with others to develop and strengthen their T-shape. As I think around the office where I work there are a number of meeting rooms that people have commandeered to create what they need. They call them things like war-rooms or project-rooms. They are often messy because they have white-boards squeezed into them and flip-charts stuck on walls where they aren’t supposed to be. Some of the tables have been split out so that people can have a large screen for their little work area. I’ve worked in these places too, it’s not very satisfactory, they really need a space that they can hack for their use.

Some videos to make you think:

One thought on “Productive Workplace: The Trans-disciplinary Space”